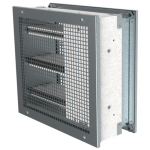 The FGS anti-fire ventilation grid is designed to divide fire sections and to prevent toxic gases, fume and flames from spreading. The FGS anti-fire ventilation grid is an element of the passive fire protection. The FGS grid is tested in compliance with EN 1364-1, ETAG 026 part 4 and PREN 1364-5:2014 and classified in compliance with EN 13501-2:2017.

The FGS anti-fire grid release mechanism is activated when the ambient air temperature reaches 74°C. In case of fire, the grid automatically closes within 10 s after melting of the thermal fuse. When the grid is closed, the blades remain locked in the closed position and can only be opened manually. Anti-fire grids equipped with microswitches are available on request.

The anti-fire grids with the servo drive

The FGS anti-fire grids with the servo drive are standardly equipped with a thermo-electric fuse, which activates the closure of the blades when the ambient temperature reaches or exceeds 72 °C. The power supply circuit is interrupted and the spring closes the blades within 20 s. All servo drive-operated grids are equipped with microswitches signalling the blade position. Grids with power supply and with a communication unit can be available on request (activation mechanism DV9-T-ST). The FGS ventilation grid is equipped with a spring-actuated servo drive that closes the anti-fire grid on the basis of a command from the BMS (EPS) system or when the thermo-electric fuse has melted.

This site uses cookies to provide services, personalize ads, and analyzing traffic.. By using this website you agree.